Welcome to the Jurassic Coast Gateway Town of Swanage in Dorset.

For many years Swanage has steadily grown in popularity as a holiday resort because of its temperate and bracing climate, its delightful surroundings and pleasant and safe bathing beach.

Its position on the Isle of Purbeck, almost surrounded by the sea, tempers the heat of summer and the cold of winter, whilst its eastern aspect renders its air more bracing than that of most south coast pleasure resorts.

With places like Lyme Regis only an hours drive away if you fancy a day trip, and the Purbeck Hills on the north and a ridge of limestone hills on the south and south-west, the town is well sheltered, and palms, cacti and hydrangeas in the open testify to the mildness of the climate.

Swanage is a seaside town and civil parish in Dorset, England, located in the south east. It is one of the two settlements on the Isle of Purbeck, located around 64 miles (10 kilometres) south of Poole and 25 miles (40 kilometres) east of Dorchester.

The civil parish has a population of 9,601 people according to the 2011 census. Ballard Down and Old Harry Rocks are nearby, while Studland Bay and Poole Harbour are to the north. 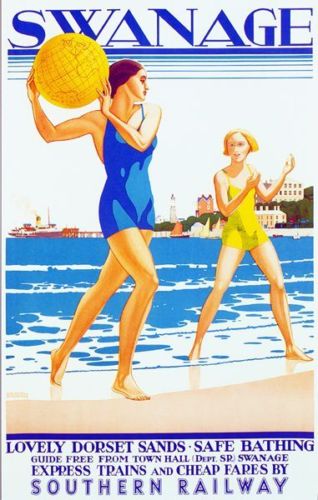 The parish includes Durlston Bay and Durlston Country Park, which are located to the south of the town. The parish also includes Herston, which is to the west of the town, and Durlston, which is to the south. The holidaymaker is drawn to Swanage by its sandy beach and sheltered bay, which is still reminiscent of a Victorian seaside resort. Because the town is at the eastern end of the Purbeck wealden valley, the bay is blocked on both sides by a hill.

The massive gleaming edge of Ballard Cliff, the end of the Purbeck chalk ridge, can be seen to the north. To the south, Peveril Point’s oolite mass reaches into the sea, its strata twisted and sharp reefs beneath the surface – possibly those on which a Viking fleet was sunk by a storm in 877.

Durlston Head, to the south-west of Peveril Point, has the Tilly Whim caves, which lead below it to a broad quarry-formed rock platform. Similar platforms can be found all along the coast, including at Dancing Ledge.

Indeed, quarrying gave the area some importance for centuries, and the predominant grey of the buildings in the town’s centre distinguishes Swanage as a Purbeck town built of Purbeck stone. Stone was transshipped here until the late nineteenth century from quays known as bankers, where it was manhandled into boats that took it to freighters moored offshore.

With the arrival of the railway in 1887, this activity came to an end, and the bankers were demolished, leaving no trace on the holiday scene.